Since its inception in 1969, and its inauguration in 1970, the Silver Fawn Club has developed from a few expatriate Sri Lankan people getting together for parties and dances, into a fully-fledged incorporated body with a proud history of social and sports events mainly for the Sri Lankans but open to anyone interested in being part of this special community.

The membership now comprises people from all parts of the world and from all walks of life. Many of the members have been with the Club since its formation and because of their loyalty and efforts, have seen it master the art of organising all sorts of enjoyable events.

The Silver Fawn Club is best described as a family club (with emphasis on ‘family participation’), fostering all social and sporting activities, and catering for members of all ages, creed or races and people of all walks of life.

Our calendar reveals a list of events which may be enjoyed by every category of member. Our popular dinner dances are held each season, with New Year’s Eve being the most formal and traditional in style. Our Mid-Year Dinner Dance gives everyone the chance to dress up for the cooler weather and our Spring and Autumn dances usually have a theme.

Throughout the year our daytime Have-a-Chat parties are always well attended while the Christmas Season features our Golden Years Party for the senior members and Carols by Candlelight Christmas show which is a delight to both young and old alike.

Families love the get-away-from-it-all style of our Weekend Camp held every year with heaps of fun, food and sport. The annual Cricket Match and Food Fair provide plenty of excitement and all the favourite home-cooked Sri Lankan dishes.

All of these are our regular events, but we often add to these by putting on a special occasion function when the need arises.

To consistently provide such a variety of events takes a lot of organising, planning and determination. We are fortunate to have had many dedicated Committee members and members over the years, all of whom have contributed their talents and expertise into building up the reputation of the Club as one with a highly professional flair for organisation and for having a good time.

Early in 1970, at the request of many interested people and at the realisation of the above-named committee itself, it was decided that the committee go ahead with plans for the formation of a Club.  This Committee could be referred to as the founder members of the Club.

At a meeting of the founder members on the 30th May 1970, at the residence of Eustace Fernando, after much deliberation, it was decided to name the organisation “THE SILVER FAWN CLUB”.

At the first meeting of the founder members of the Club held on the 10th June 1970, at the residence of Stanley Anthonisz, the following Office Bearers were elected for the charter year of the Club:

The Office Bearers of the Club were presented to many prospective members at a dance held on the 13th June 1970, at the residence of Frank Vander Straaten and those interested were invited to join the Club.

At the end of the first year of the Club’s existence, 108 members had been enrolled and this figure was doubled in the next year and the membership at present stands at over 350, the majority of which are family members.

Apart from the three main dances held during the year, several other forms of social entertainment are organised by the Club each year.  Our main feature dance has traditionally been our New Year’s Eve Dance, however, through the years, the Club has organised many functions such as Club Nights, Bus Trips, Car Rallies and Picnics, Sporting Tournaments, Christmas Carols Concerts and Curry Nights to name just a few.

A Senior Citizen’s Party to entertain senior members of the Club was introduced in 1981, with a name change to the Golden Years Party in 1984. Our popular Have a Chat Parties (Meet and Greet) commenced in 1987, with our Annual Children’s Christmas Party commencing in 1970. These functions are still part of our social calendar each year.

In 1972, the Club extended its activities to Sports and a Table Tennis Tournament was conducted for members, which has proved to be a popular annual event.  It also marked the entry of the Club in the Netball Tournament conducted by the Brisbane Netball Association.  Our girls performed very creditably, winning the Premiership in 1973, being Runners Up in 1974, winning the Knock Out Tournament in the A Seniors in 1974 and finishing as Runners Up once again in 1975.  However regretfully due to a lack of players, we had to withdraw from the competition from 1976.

The Silver Fawn Cricket team entered the Q.C.A. Warehouse Division Cricket Tournament in 1973 and has acquitted themselves very well, becoming Premiers in 1974 and Runners up in 1976. Squash and Snooker Tournaments were introduced to the Club Activities in 1973 and Tennis and Carrom were added in 1975.

A feature of the Club is that it caters for members of all ages, creed or races and people of all walks of life, and it could be described as a family club.

The Club has progressed from strength to strength through the years and was incorporated on 11 June 1987 giving endless hours of entertainment, fellowship and enjoyment to all members.  The Club is most fortunate that through the years the Committee has consisted of office-bearers who have to be very devoted, freely giving their time and best efforts.

A Club’s existence depends not on the abundance of the things it possesses – a ground, a clubhouse, furniture and equipment, money in the bank, etc – but on the individual efforts of its members, living human beings.  Give then, my fellow members, of your time, your energy, your specialised knowledge, your sporting talents to enable the Club to go on from strength to strength. 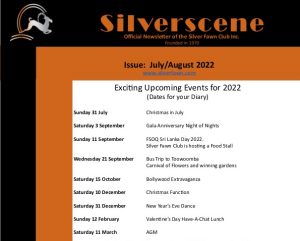